Every mother gazes down into her new baby's eyes and wonders what their lives will be like, who they will grow up to be, and makes plans for brilliant futures. When I held each of my children for the first time, I was overwhelmed with the sense of responsibility that came along with being given the care of these precious souls, and I was overwhelmed by something else, too - a sense of the strength they each carried within them. These were warriors sent into my home to continue the fight they began in the premortal realm - a fight against the lies of Satan.

I've spoken with several other mothers who have expressed feeling the same way, and it's no surprise. We know that as we draw closer to the end times of the world, God will be sending His most choice spirits, His warrior spirits, to lead this last charge and carry us on to victory at the time of the Second Coming. We are now raising those warriors in our homes to stand up and fight against the evil ploys of the adversary. 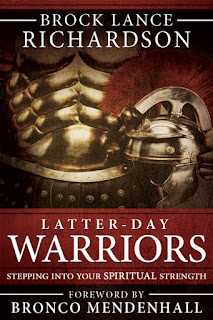 When Brock Richardson first contacted me to review his new release, Latter-day Warriors: Stepping into Your Spiritual Strength, I said yes primarily because I'm trying to read a little more inspirational nonfiction. What I didn't realize was that this book was going to be a tool for me to teach my children what I already know about them - that they have incredible missions here on this earth, and to help prepare them for those missions. We've had long discussions about it before, but as I read, I said to my husband, "I need to read this out loud to the kids." There are stories in here I believe will really inspire them.

Brock starts out by relating the story of his father, who was so ill during most of Brock's childhood that he'd go straight from school to the hospital so they could spend time together. His father would sometimes sneak away from the hospital to attend Brock's sporting events during high school, always in great pain, but willing to make that sacrifice. This man stood as a big example to Brock of everything he wanted to be, and when his father passed while Brock was serving his mission, Brock was devastated, but took great heart from something his mission president said - that now Brock's father could teach the ancestors of the people Brock was teaching in Uruguay. As Brock stayed close to the Spirit, he felt his father there, teaching with him.

The remainder of the book is broken up into ten chapters, each chapter being an interview with a member of the BYU football team. This may seem like an abrupt change of subject, but it's not - Brock uses football as an analogy for the battles we're all facing, and he learned during his own time on the BYU football team that the strength of the players came from their belief in God. Each interview not only discusses physical strength, but spiritual strength, and there are statements not only from the players, but their wives, making this book perfect for anyone to read. Us girls are warriors in this battle too, more powerfully than we even realize!

What I appreciated most about this book is the fact that it brings the truth to the forefront and makes it very real and very pertinent for our time, right now - the battle is real, we must be prepared, this isn't something that we need to worry about ten or fifteen years from now. We must be working diligently every day to ensure that our testimonies are in place and that we are seeking the Spirit in all we do so that when it's our turn to go onto the battlefield - when we have a missionary opportunity or someone is challenging our faith - we know what to say and we are able to be guided by the Holy Ghost in what other things we should say. A key point made in the book is that the power of our words and the force of our testimonies are the true weapons we will use. We may feel as though we aren't mighty in speaking, but if we're living our lives in accordance with the commandments, the Spirit will guide us in what to say when we need to say it.

I'm eager to start reading this book with my kids and to use it as a discussion point in our family home evenings. I feel very blessed to be raising four warriors, and my husband and I need to up our game and make sure that we're the best warrior trainers we can be.
Posted by Tristi Pinkston at 11:40 PM