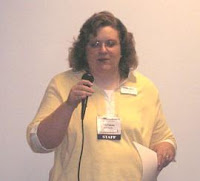 I've been a writer for as long as I can remember. After receiving much parental acclaim for my first masterpiece, titled "Sue the Dog," I tried my hand at poetry. This phase lasted until my early teens, at which point my poems took a decidedly macabre turn and I decided to abandon it in favor of fantasy. That … turned out to be a fantasy.
I was taught at home by my parents. After I graduated from high school, I took two correspondence courses from Brigham Young University in creative writing, and also a course in floral design from International Correspondence Schools. After that, I took a job working at a floral shop, which I loved.
At the tender age of 18, I met then 34-year-old Matt Pinkston of Eugene, Oregon. We were engaged on our tenth date. This consequently sent my parents into shock. After we revived them, we were married in the Salt Lake Temple. I was 19 by that time, which, as we all know is so much older than 18.
We started our family with a baby girl, and then added three boys to the mix.  They're extremely smart, beautiful, talented, spiritual, well-behaved ... well, would you expect anything less of my children?
When my first son was about 8 months old, I had a strange dream which piqued my interest in World War II. As I hit the Internet and did research at the library, the story of "Nothing to Regret" came to life and was published in 2002.
The week after my fourth child joined our family in 2004, my second book "Strength to Endure" was released, written about World War II from the perspective of a German family. It was quite a kick to have a baby boy and a baby book at the same time.
March of 2008 saw a new addition to our family. No, not a child … a book. "Season of Sacrifice," the true story of my Hole-in-the-Rock ancestors and a labor of love, was printed by Golden Wings. To tell the experiences I had while writing this book would take far too long, but I feel blessed to have been able to help preserve the memory of these remarkable pioneers and to feel of their spirit while I told their story.
With the release of “Agent in Old Lace” in 2009, I headed out into uncharted territory. Well, uncharted for me. I had never envisioned myself writing contemporary novels—I had always pictured myself sticking with historical fiction. But one day, the idea for “Agent in Old Lace” popped into my head, and I wrote it down. It’s undergone many changes since then, and I’m not sure if those who read the first version would even recognize it, but it’s all been for the better. And what a fun ride it has been! I have to admit, I have just the tiniest little crush on Rick Holden.
Most fun of all has been writing "Secret Sisters," published in 2010. My little ladies bring out my whacky sense of humor, and I know for a fact that they talk to me and put words in my head. I look forward to sitting down to write and seeing what they've been up to. The release of "Dearly Departed" in January of 2011 fulfills a dream of mine - having a series published.
I'm a stay-at-home mom, a home schooler, a media reviewer, an editor, a regular presenter at the LDStorymakers' writers conference, a Cubmaster, and a headless chicken. In addition to the novels I write, I maintain a blog which contains tips for aspiring authors and also my own personal ramblings, which sometimes make sense and sometimes do not. I enjoy reading, watching good movies, and making scrapbooks. I enjoy cooking and consider it a minor miracle when I can get all four children to like the same meal. I also enjoy making shopping lists (which I sometimes actually use), spending time with my kids, and taking Sunday afternoon naps, which are so necessary.
Quick Facts:
Favorite Colors ... burgundy, mauve, country blue, forest green, sage, charcoal gray
Favorite Shoes ... ballet flats in various colors
Favorite Beverage ... ice water
Favorite Foods ... tacos, Arby's sandwiches, Wendy's chicken sandwiches, my own beef alfredo with penne, great big green salads with the works (including diced beets)
Five Favorite Books ... "I Capture the Castle" by Dodie Smith, "Wildwood Dancing" by Juliet Marillier, "Little Women" by Louisa May Alcott, "Christy" by Catherine Marshall, and "Girl of the Limberlost" by Gene Stratton Porter (check out my vast assortment of opinions on GoodReads)
Five Favorite Movies ... "Return to Me," "Sense and Sensibility," "Cranford," "Pride and Prejudice" (the Colin Firth version) and "Somewhere in Time"
Guilty Pleasures ... "Remington Steele," "Monk," and "Dancing with the Stars"
Worst Bad Habit ... staying up too late, and eating too late, while staying up


If you would like to contact me with questions, to inquire about book clubs or other speaking engagements, or just to say, "Hi! How are ya?" you can reach me at tristipinkston AT gmail.com