The Ball's In Her Court - Heather Justesen

Review Week continues with a look at "The Ball's In Her Court," by new author Heather Justesen. 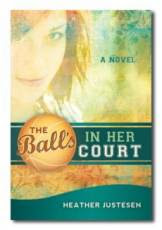 Denise DeWalt is a successful computer programmer with a loving adoptive family. As long as she keeps her walls in place, life is good. She doesn't let anyone get too close and she takes out her negative feelings on the basketball court and on her tile grout. She's got a mean lay-up and the cleanest grout in Utah.

Denise's birth mother was a neglectful, abusive drug addict, and Denise was removed from the home after an altercation with her mother left her with a broken arm. If only that was the worst injury she suffered. When Denise feels the need to seek out her biological family and put the pieces together, she starts having nightmares just as she did as a child, nightmares that wake her up drenched with sweat.

Rich is her new boss, and he's immediately taken with her. She can't deny she has feelings for him, too, but she just can't see letting anyone in past the barriers she has so carefully built. They are the only things keeping her strong in the face of adversity.

I've been a member of Heather's critique group for a year and a half now, but she had already submitted this novel when I joined the group and I didn't get to read it before publication. I was so happy to get my hands on it - I was familiar with the characters from the spin-off, but I didn't know how they had come to be where they were. I read "The Ball's In Her Court" in two sittings, and I have to say, LDS women's fiction has found a fresh new voice. There were some editing gaffes here and there, repetitive words and the like, but I pushed those aside and appreciated the unique turns of phrase, the well-plotted storyline, and ... I have to say this ... the very nice kissing scenes. This author knows how to write a kiss.

Heather has many more books in the works which revolve around these characters, and I plan to own every single one of them.

This book was given to me by the author because I'm in her critique group. I was not specifically asked to post a review, and so I don't consider the book as payment for a review. I just happened to write one and post one because that's what I enjoy doing. Consider this disclaimed.
Posted by Tristi Pinkston at 12:22 AM

Jennifer @ Fruit of My Hands said...

Tristi, are we supposed to post disclaimers on book reviews now?

Jen, the FTC is trying to make it so we're supposed to, and I'm pretty darned opposed to it. I'm doing it sarcastically now as an ornery way of showing my feelings about the whole process. :)

This is one I am looking forward to--thanks for the review!

It is a really good book, and Heather has others that spin off with the various characters.

I'm always on the hunt for good LDS fiction. It's in the queue.

I just started reading Heather's novel and am enjoying it. The story is inviting and the characters are easy to get along with.

Thanks for the review, Tristi! I'm so glad you enjoyed it!